Recipe from “The Sweetheart Locket,” a book tour & an unexpected angel

Instead of a regular blog post today, I have several bits of news to share, as well as an anecdote about an unexpected angel who brightened my day when I needed it.

Make a cake featured in the The Sweetheart Locket 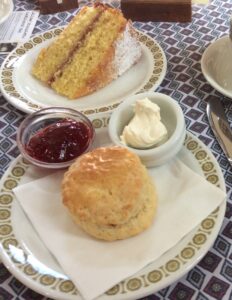 Earlier this week, I wrote a post for Novel Noshing, a blog series organised by author and literary agent Susan Nystoriak, about food in books.

My favourite cake is the British Victoria Sponge and I mention it several times in the story.

My guest post for Novel Noshing offers a look-behind-the-book as well a recipe (UK and US versions) to make a Victoria Sponge for your own British-inspired afternoon tea.

The Sweetheart Locket is going on tour…virtually 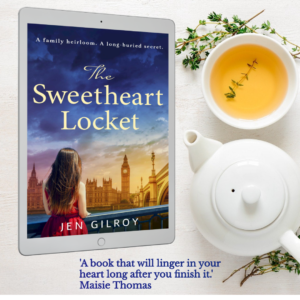 If you missed it in my June reader newsletter, The Sweetheart Locket will be on a virtual book tour from 28 June to 2 July 2022.

Find out more here and follow the tour schedule for reviews, exclusive book excerpts, interviews with me, giveaways and more.

Thanks to organiser Rachel’s Random Resources and participating bloggers for what will be a fun and busy time with 25 stops over five days.

As we all do, I’ve had some recent personal and professional challenges.

One day last week I took Floppy Ears for a walk in the hope that fresh air and exercise would bring clarity to certain situations and help me take a new start where needed.

Even at eight in the morning, it was already hot and humid, and Miss Floppy Ears huffed and sniffed and dawdled with typical canine obliviousness to my deadlines and long to-do list.

Rounding the corner of a nearby road, someone walked toward me from the other direction.

When crossing paths, we exchanged greetings 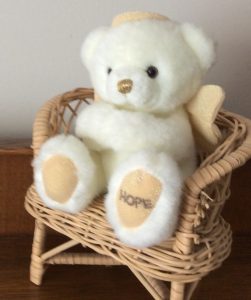 and chatted about the weather.

I then tugged a reluctant Floppy Ears on our way, but the person turned back to me and said: “Have a blessed day, my dear.”

Only a few simple words between strangers but so powerful. In that instant, I felt “blessed” and had a new sense of hope in a way as profound as it was unexpected.

I was also reminded of “Angels Among Us,” a song originally recorded by the American country band, Alabama, Tech Guy and I included in our wedding ceremony almost twenty-six years ago to that day.

At a time I felt alone, frustrated, worried and tired, an angel was there when I needed them—and despite taking the same route daily, I hadn’t seen them before or since.

Coincidence perhaps, but I like to think someone was watching over me.

If you’re interested, listen and watch the official music video  of “Angels Among Us” on YouTube here.